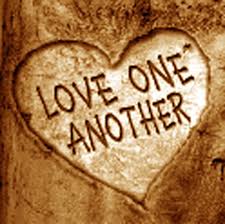 Jesus said to his disciples: “As the Father loves me, so I also love you. Remain in my love. If you keep my commandments, you will remain in my love, just as I have kept my Father’s commandments and remain in his love. I have told you this so that my joy might be in you and your joy might be complete. This is my commandment: love one another as I love you. No one has greater love than this, to lay down one’s life for one’s friends…This I command you: love one another.” ~John 15:9-17

The Christian life is very very simple…not easy, but simple. Jesus makes it abundantly clear, even to the point of stating it over and over, if we are going to call ourselves His disciples then we absolutely must love one another. Love is not an “extra” to the Christian life, but is rather essential to it. God is love. God the Father loves the Son. God the Son loves us to such a great degree that He was willing to die for us. Naturally, then, if we call ourselves His, how could we ever fail to love others? In fact, in the first epistle of John, John tells the community that if they don’t love each other then they can’t even claim to know God at all! He calls them liars! He says, “Beloved, let us love one another, because love is of God; everyone who loves is begotten by God and knows God. Whoever is without love does not know God, for God is love.” (4:7-8)

I think as Catholics we too often get caught up in all the “have tos” “musts,” and “don’ts,” and in doing so become horrible legalists–always looking for the fine line to justify or excuse a particular action. We live our Christian life under the burden of the finite details instead of focusing on the broader principal the underlies all of the Church’s teachings, her dos, don’ts, and musts, namely, love! Jesus had little time or patience for the Pharisees for this very reason (see MT 23). He calls them “blind guides” who have entirely missed the point on what it means to be a child of God.

The Christian life, far from a life of fear of wrongdoing (like abused children always afraid of angering father) is instead one marked by joy, celebration, hope, optimism, life, and love. We are loved my a merciful and forgiving God. We don’t live in fear, we live in God’s grace, mercy, and love. The question each of us must ask ourselves, is not primarily “What does the Church say about this or that,” but instead, “Is this the most loving thing that I can do in my present situation?” When we realize, as St. Paul teaches the Church in Corinth (10:23), that we are free in all things, then we realize also, that our words and actions have amazing and awe-ful consequences. When we come to know the true power of our actions, we will naturally want to make sure that what we do is indeed what is most loving–and that’s the role of the Church in every generation! Namely, to be a sure guide in the formation of our conscience so that we do the good we desire to do from moment to moment.

The Church is an amazing gift to us! God sends His Spirit into the Church, and in every generation speaks to her that she might know what is most good and most loving at every moment in time until Christ returns. We use the Church’s vast experience to form our conscience, and it’s within the well-formed conscience that we hear the voice of God echo in our depths prompting us to do the good that God desires of us, to know what is most loving and true. The well-formed conscience is able to choose what is truly most loving in any particular situation, and then allows us to sleep well in the peace of knowing that in each circumstance of our day we chose to love in obedience to Christ, and thus remain His. St. Augustine said, “Love God and do whatever you please: for the soul trained in love to God will do nothing to offend the One who is Beloved.” Well said, indeed. Let us who desire to love in word and deed never fail to first be trained in it.

Welcome to my blog! Please read reflectively with an openness to the Spirit. Constructive, uplifting, affirming, and loving comments are welcome and warmly encouraged. Please be respectful of others' views and opinions. We worship a big God!
God bless.